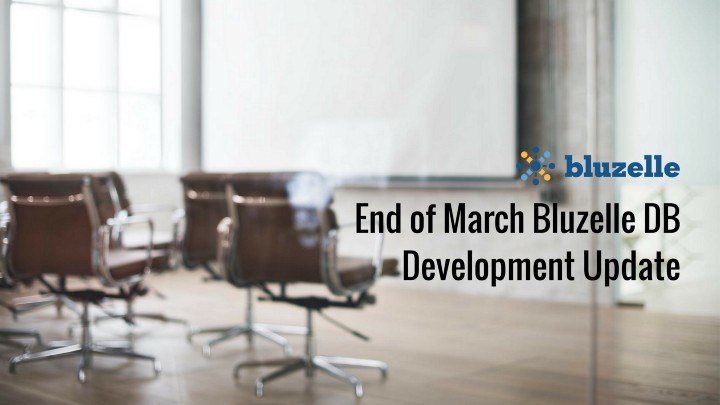 Welcome to our end of March monthly development update. We have exciting news as we push hard on the Lovelace release, slated for the end of June, 2018.
By Neeraj Murarka

In anticipation of Bluzelle’s 2nd ever hackathon, being held in Vancouver at the end of April 2018, the Lovelace beta is the current short-term goal, and is on track. Still under development and not included in this beta are the Ethereum and NEO integrations as well as a Lovelace single swarm public testnet, both of which will come at the end of June.

The JS library is complete and undergoing testing against the emulator environment. The library provides developers who want to use Bluzelle’s DB with a JS-based interface with which to connect and perform CRUD operations. Work is already in progress to have the exact same library also communicate with the daemon, enabling full-service CRUD accessibility between producers and consumers on the Bluzelle network. The goal is for the library to be able to talk to either the daemon or an emulator, interchangeably.

As mentioned in the previous blog, the emulator tool, currently available for internal testing and with selected Bluzelle partners, is the baseline against which the client-side is tested. The JS library is tested against the emulator regularly, and the emulator is also the reference that the daemon team uses to assess and determine correct behaviour.

In parallel with the client side, the daemon team is hard at work building out Lovelace beta’s daemon. The daemon’s critical RAFT consensus engine is already under construction. Bluzelle’s RAFT design is modified to support the Bluzelle database design and these changes are a big part of the work our daemon team is undertaking.

Once the Lovelace beta is completed (by the end of April 2018), members of the public will have the exciting opportunity to download and run the daemon and experiment with their own private swarms. In fact, the Bluzelle April hackathon itself will be powered by a single globally-spanned swarm of many nodes that hackathon developers can build and test against. We encourage developers to try the code out and provide feedback and contributions.

As part of Bluzelle’s commitment to the product and also to the free and open source software communities, we will be bringing out a bounty program and associated licensing details in coming months. These will encourage members of the public to contribute their own projects and code to the Bluzelle project. Bluzelle hackathons serve as a means to kickstart such projects. Please look for details about our public free and open source software initiatives in coming updates, as well as details on other hackathons being planned after the April Vancouver one. Also look for further tech updates from myself, as well as webinar sessions.